Manipur University was established on 5th June 1980 under the Manipur University Act. 1980 (Manipur Act 8 of 1980), as a teaching-cum-affiliating university at Imphal with territorial jurisdiction over the whole of the state of Manipur and it was converted into a Central University w.e.f. 13/10/2005. The Manipur University Act No 54 of 2005 received the assent of the President on 28/12/2005. At present, the University has 116 affiliated colleges inclusive of 2 medical colleges. Manipur Institute of Technology (MIT) is a constituent college of the University.
Located at Canchipur, Imphal, the capital city of Manipur, the university campus is spread over an area of 287.53 acres in the historic Canchipur which is the site of the old palace of Manipur "The Langthabal Konung" (Palace), which was established by Maharaja Ghambhir Singh in 1827 AD just after the liberation of Manipur from Burmese occupation. Maharaja Gambhir Singh took his last breath at Canchipur. Canchipur is also the Birth Place of Dr. Lamabam Kamal, a renowned poet of Manipur.

VISION: To become a world-class university and educate the youth of the region so as to enable them to participate fully in the development of the nation and become responsible citizens.

MISSION: To foster excellence in teaching and research, to maintain the social relevance of education, to educate the youth of this region to become responsible citizens, and to promote innovation in the teaching-learning process

ABOUT THE DEPARTMENT OF PHYSICAL EDUCATION & SPORTS SCIENCE: The Department of Physical Education and Sports Science established in November, 2008, is one of the emerging professional departments of the Manipur University. The Department offers 2 Year Master of Physical education and Sports (MPES), and Ph.D. Programme. Physical Education, which is an integral part of education, aims at improving the human performance through the medium of physical activities selected to realize the desired outcome. It also includes the acquisition and refinement of motor skills, the development and maintenance of fitness for optimal health and well-being, the attainment of knowledge and growth of positive attitude towards physical activities. Moreover, Physical Education is concerned not only with the physical outcomes that accrue from participation in activities but also with the development of knowledge and attitudes conductive to lifelong learning and participation. In fine, it aims for the development of physically, mentally, socially and emotionally fit citizens. Every human being has a fundamental right of access to physical education and sports science which are essential for the full development of their personality. The freedom to develop physical, intellectual and moral powers through physical education and sports science must be guaranteed both within the educational system and in other aspects of social life.
Research in physical education and sports science and other human endeavours where the emphasis is on achieving high level or optimal performance are obligatory. The performance related research in physical education and sports science such as Athletics, Football, Hockey, Volleyball, Handball, Judo, Wrestling and other areas where physical and psychological performance is undertaken with objective of producing optimal performance. The work in this area embraces the domains of Physiology, Biomechanics, Psychology, Science of Sports Training, and Sports Medicine for human performance analysis through research.
Physical education plays a part in the lives of almost all young people's education around the world. If the physical education experiences of those young people are to be positive and effective, then we need to know something about how it is taught, who is teaching it, what is being taught and how it can improve the human performance. 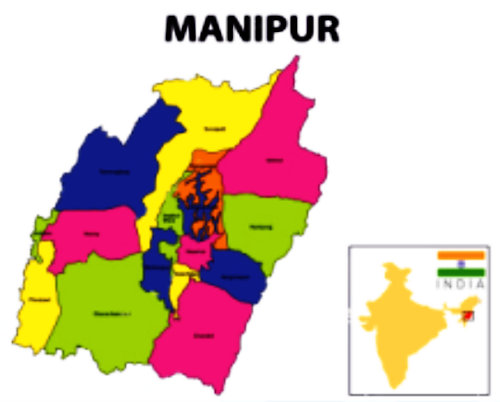 The erstwhile princely state of Manipur is a jewel of a land with its bounteous vista of untrammelled beauty and ancient traditions. Set as an oval valley amongst smoky blue hills, Imphal is the capital of this beautiful land of Manipur. It is one of the states that comprise the north-eastern region of India and shares an international border with Myanmar (Burma).
Its immediate neighbouring states are Mizoram, Nagaland and Assam. This state can claim a geographical unique position since it, virtually, is the meeting point between India and South-East Asia. Manipur Valley stands at a height of 790 meters and is surrounded by 9 hill ranges in circles giving the impression of a hill and trough.

IT'S PEOPLE: The people of Manipur include the Meitei, Naga, Kuki, Meitei Pangal, Bamon and other communities. The Meiteis, Bamons or the Brahmins, and Pangals mainly live in the valley. There are a number of different tribes who also live in Manipur. Meitei-lon (the Meitei language or Manipuri) is a common language generally used for purposes of communication

PLACE OF INTEREST IN MANIPUR: Moreh: Moreh is about 100 km away from Manipur University. It is a rapidly developing and important trade point in India on the border with Myanmar, (Tamu being closest Town of Myanmar to the border). Moreh, today is known as the commercial capital of the state and also called India Gateway to South-East Asia countries. The Indo-Myanmar Friendship Bridge in Moreh connects India to Kalewa in Myanmar's Sagaing Division.

LOKTAK LAKE: About 45 km away from Imphal is the Loktak Lake and Sendra Island, which is part of the land's ecosystem. From the vantage point of a Tourist Home on Sendra Island, one can see the vastness of a fresh water lake that surrounds the island.

KEIBUL LAMJAO NATIONAL PARK: This National Park's habitat consists of the endangered dancing deer, “the Sangai”, or “brow-antlered deer” of Manipur. But this Park's real claim to fame is that it is the only Floating National Park in the World.

MOIRANG: About 45 km from Imphal – a permanent spot in history, Subhas Chandra Bose's intrepid warriors first unfurled the Indian flag in 1944. The INA Museum preserves the moment for posterity, displaying a collection of letters, photographs, articles, various records and other items of interest.

IMA MARKET: Handloom and handicraft products are sold by women at this unique market in Imphal – it's the only market in the country owned and run exclusively by women.

How to reach Manipur University : Imphal can be reached by air and road. Air services are available daily from Delhi, Kolkata, Guwahati. Numerous tourist buses are servicing daily from Guwahati to Imphal. The University Campus is only 7 km, from the heart of Imphal city on the Indo-Myanmar Road (National Highway 39). The Bir Tikendrajit International Airport, Tulihal, Imphal has situated around 11 km from the Campus.

BY AIR: Tourists can directly fly to Manipur as the airport is located in the capital of the state i.e., Imphal. The nearest airport in Imphal(Bir Tikendrajit International Airport) is approximately 11 kilometers away from the University Campus and is well-connected to the major cities of the country including Delhi, Kolkata, and Guwahati along with other important cities in North-East India. Some of the popular carriers who fly daily to Imphal are Air India, Air Asia, IndiGo, etc. Once you reach the Imphal airport, you can hire a prepaid or a private taxi outside the airport. This can be considered as the best mode of transport to reach the city. The nearest international airport to Imphal is in Kolkata which is well-linked with different cities across the globe.

BY RAIL: The state of Manipur does not have a direct train service. The nearest railway junction is the Dimapur in Nagaland at a distance of approx 210 km from Imphal and is connected to the major cities of India. Some of the popular trains that run from Dimapur are Avadh Assam Express, Brahmaputra Mail, New Delhi Dibrugarh Town Rajdhani Express, Chandigarh Dibrugarh Express, Amritsar Dibrugarh Weekly Express, and Guwahati Rajdhani. The trains do not run daily so do check the schedule before booking it. Getting down at the railway station, tourists can avail the public transport facility (bus and car) that would take you straight to Manipur.

BY ROAD: As the road network to Manipur is efficient, tourists can make the most out of the journey to Manipur by enjoying the sightseeing. Tourists can avail of the service of the Manipur State Road Transport Corporation (MSRTC) and many other private buses to reach Manipur and other nearby states of North East India. Many state-run buses from Nagaland and Manipur Bus Corporation run from the neighboring towns of Aizwal, Dimapur, Itanagar, Kohima, Shillong, and Agartala. Many people from Dimapur (210 kilometers) and Guwahati (479 kilometers) drive to Imphal.